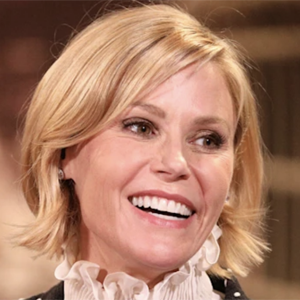 Julie Bowen is currently living a single life. She was previously married to a real estate investor Scott Phillips. The couple got married on September 9, 2004. They also have three children Oliver, Gustav, and John. However, in 2018, the couple got divorced.

Who is Julie Bowen husband ?

Julie Bowen is an American actress. She is best famous for her role in the ABC TV sitcom Modern Family.

She was born on 3rd March 1970, in Baltimore, Maryland, USA. She is the daughter of commercial real estate developer John Alexander Luetkemeyer Jr. and Suzanne Frey.

Julie has two sisters Molly, an interior designer, and Annie, a doctor. Although there is nothing much written regarding her early life on the web.

Likewise, she attended schools like Calvert School in Baltimore, then after Garrison Forest School in Maryland, and even Roland Park Country School.

Later, she moved to St. George’s School and then went to Brown University where she majored in Italian Renaissance studies.

In 1992, she had a role in the soap opera Loving and also appeared in an episode of the college drama series Class of ’96 in 1993.

The following year, she had the lead role in the movie Runaway Daughters and also portrayed the love interest of the leading character in Happy Gilmore in 1996.

She got wider prominence after her role as Claire Dunphy in the ABC TV sitcom Modern Family from 2009 to 2020. She also received six Primetime Emmy Award nominations.

Moving on to her personal life, Julie Bowen is currently living a single life. She is not dating anyone at present times.

However, in her past, Bowen was once a married lady. She married a real estate investor Scott Phillips in 2004.

From their marriage, they also have three sons Oliver, Gustav, and John. However, their marriage could not last for a very long time and they separated in 2018.

As of now, she is living a single life and is raising her children. She is a very successful personality and has a decent life.

Yes, the Modern Family star is currently single. Bowen is not looking to date anyone and is more focused on herself.

After her divorce, she has not shown much interest in dating and has continued to live a single life on her own with her children.

Prior to her marriage, she was once in a relationship with comedian David Spade for a bred time. Though their relationship could not last long.

However, when the right time comes, she will surely find the right partner to spend her life in the near future. Till then, she prefers to maintain things the way they are.

Whom has Julie Bowen Dated?

The gorgeous actress Bowen has not been very open when things come about in her personal life. Prior to he husband, she was in one relationship.

In 2002, she started dating American comedian David Spade. Their bond grew over time however, could not last long.

After just a year of dating, they started to have differences that affected their relationship. This led to a break-up in 2003.

After their breakup, David went on to date several other personalities like Brittany Daniel, Carmen Electra, Nicky Whelan, Naya Rivera, and others.

Bowen, on the other hand, went on to date Scott Phillips and also went on to marry him in 2004. They have three sons from their marriage.

However, after fourteen years of living as a married couple, they announced their divorce in 2018.

Currently, Bowen is not seeing or dating anyone and has kept her primary focus solely on her career over other things.

Nonetheless, she has a great life and also a very successful career ahead of herself.

Presently, Bowen is living a single life. However, in her past, she was once a married woman. After her breakup with Spade, she met real estate investor Scott Phillips.

After a few months of dating, they decided to level up their relationship by tying their knots. The couple stepped down the aisle on September 9, 2004, in an intimate wedding ceremony.

Everything was going very fine for the family. However, over time, the couple started to have complications in their marriage.

After spending 14 years together, they finalized their divorce in February 2018. She has not dated anyone since and lives a single life.

The talented and famous actress Julie Bowen has an estimated net worth of around $18 Million per celebrity net worth.

A huge load of her income mostly comes from her career in the cinematic and television business.

Bowen also charges $500,000 per episode. Although her annual revenue is unavailable it is very sure to be in millions of dollars.

Her net worth in the upcoming period is also very positive to take a huge rise with her growing success and fame.